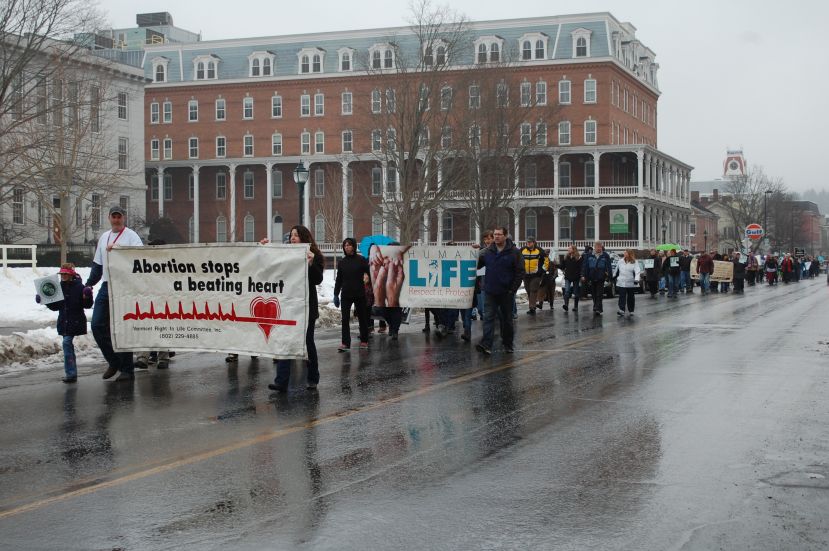 More than 350 people marched from Montpelier City Hall to the Statehouse Jan. 21 for the annual Rally for Life, meeting other pro-life advocates there to continue their call for respect for all human life.

The event came the day after Donald J. Trump was inaugurated as 45th president of the United States, hours before the massive Women’s March on Montpelier drew an estimated 15,000 participants and the day before the 44th anniversary of the U.S. Supreme Court decision that legalized abortion.

The day’s events began with a pro-life Mass at St. Augustine Church in Montpelier celebrated by Burlington Bishop Christopher J. Coyne; following the march, life advocates gathered in the House chambers to listen to speeches against abortion and in favor of measures to respect the life of all humans from conception until natural death.

Jewels Green, a pro-life advocate and writer from Philadelphia and one of the featured speakers, said before the Mass that every state is important in the “fight for life.”

She said the “time is right in Vermont” to begin to make changes for life – not just the unborn but also for “Vermont elderly, infirmed and those vulnerable to pressure to assisted suicide.”

She told her Statehouse audience that she had an abortion at age 17, subsequently attempted suicide and spent more than five years working in an abortion clinic. But in 2010 she learned of a surrogate mother who was carrying a baby with Down syndrome, and the parents paid her contract and directed her to have an abortion.

“I knew fundamentally that was wrong,” she said. “If I could say that abortion was wrong, it finally clicked all abortion is wrong.”

Bishop Coyne – who opened the Statehouse gathering with a prayer – gave the homily at the Mass and walked in the march. At the church he prayed for the protection of all human life especially those most vulnerable.

“Sometimes in our society children are seen as something less than a gift, even as a burden,” he said. But “children and life are a gift, a gift of creation….All life is sacred. All life is from God, and we must protect it.”

Dr. Felix Callan of St. Andrew Church in Waterbury, who has been active in the pro-life movement since 1972, said he is more optimistic than in the past for an increase in respect for life. The election of Trump, who has said he is pro-life “could be an opportunity” for the pro-life cause to make strides nationally, he said.

Carrie Handy, respect life coordinator for the Diocese of Burlington, said she was encouraged by the number of young people involved in the pro-life movement “who have not bought the idea that women’s rights include depriving life to the unborn.”

Regarding Trump, she said, “I have every reason to believe he will be true to his pro-life promises” which include appointing pro-life justices to the Supreme Court and defunding Planned Parenthood, a provider of abortions.

Sharon Iszak, who attends St. Joseph Co-Cathedral in Burlington, said she attended the prolife Mass because Mass “is the best way to begin every day.”

She believes the new president “will encourage a sincere respect for life.”

During the march after the Mass, people of all ages made their way up State Street. The messages on their signs included “Abortion stops a beating heart,” “Life,” “Face It. Abortion Kills,” “Abortion hurts women” and “Pray to end abortion.”